My NYCC Wrap Up - Saturday, It's all about Jessica Jones

Saturday was my busiest day. My buddy Kalvin and I had decided to cosplay Luke Cage and Jessica Jones, respectively, and we're determined to get into the Marvel Netflix panel. Thanks to a short Friday, I was pretty well rested and headed out a few hours before the doors opened to queue up for the great hall wristbands. This, however, turned out to be a mess. 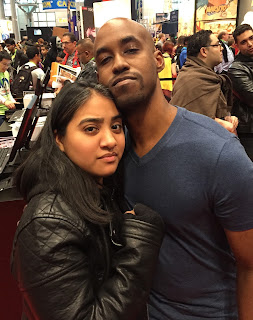 We didn't realise that the VIP/Pro badge entrance opened later than the regular entrance so, the queue for the panel we wanted was pretty much full when we finally made it in. We assumed that when we were two of the last fifteen people let in the line, we'd be guaranteed a wristband to get into the hall. This was not so. A second overflow line began along the far wall. While every other line for all the other panels received their wristbands almost immediately, even before their lines were capped, we remained standing there until after 10, when the halls and rooms were opened. And unbeknownst to all of us, the overflow line began to receive their wristbands before our line had even finished. So, unsurprisingly, they ran out before we all got one. It also didn't help that the lines were not being monitored well AT ALL and at least 100 people cut into the line and pushed their way to the front. After an hour in line, we had nothing. I complained and I'll admit, I had a breakdown thanks to some fatigue and a lot of hunger. I ended up writing my name down on a special list; I thought nothing would come of it but was told to come back at around 3pm to for an update. 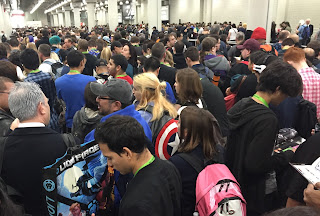 I decided to go elsewhere to calm down and we headed to the exhibition hall. I wanted to check out Marvel since I knew they were doing a signing for each Netflix show. As we walked up, they were finishing up the Daredevil cast signing.

While that was going, Kalvin and I took the opportunity to participate in the Jessica Jones photo experience in which you would take a photo in Alias Investigations. It was a pretty great set up with some cool props and as a fan of Alias (the comic series in which Jessica Jones was introduced), I loved the tiny glimpse into the world the TV show was creating. If you haven't watched them, check out the great teasers for the series. The image to the right of the desk is taken directly from the most recent teaser. GAH! I can't wait for November 20th!

Once the Marvel booth cleared out, we headed to stand by the front of the stage, ready to hopefully be picked! Across the barricade, another Jessica Jones cosplayer noticed us and we got this great shot together along with a Daredevil cosplayer! It was one of the few instances that our costumes were recognised as such. Ha! 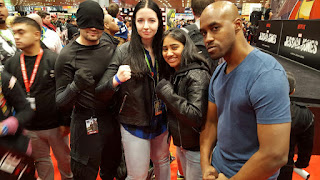 After more than an hour of waiting, the cast and arrived! Wil Traval, Erin Moriarty, Carrie-Anne Moss, Rachael Taylor, Mike Colter and Krysten Ritter, along with showrunner Melissa Rosenberg and Marvel TV head honcho, Jeph Loeb all took their places at the tables on the stage. The signing began. When we were almost up to the table, Krysten noticed my cosplay and got excited and then I pointed to Kalvin and she was even more excited! She pointed us out to Mike who was sitting next to her. It was pretty fantastic. When we made it up, the whole cast was so friendly and they all seemed so excited about the series! 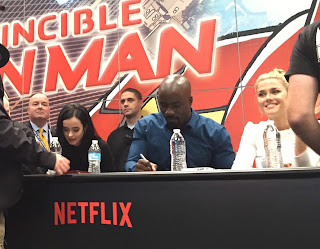 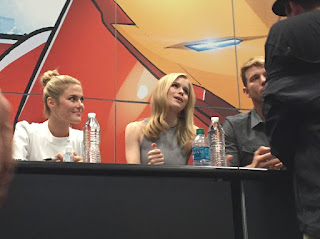 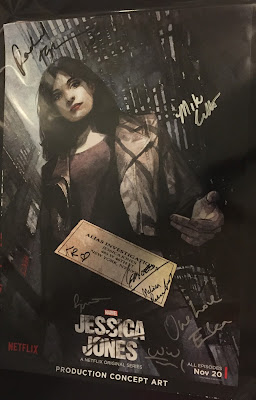 After the signing, we headed straight for the queue hall to get an update on the line issues. Because of the "special list", we were put in a separate line and eventually walked in! So everything turned out okay!

The Daredevil panel was GREAT. They showed a great reel for season one and an AWESOME teaser for season two!

The Jessica Jones panel was FANTASTIC. Afterwards, they showed us the whole first episode! It was exactly what I wanted the show to be and more. Krysten Ritter was perfect as Jessica Jones. I still swoon whenever I see Mike Colter as Luke Cage. Hehe.

So, despite the bumps in the road, Saturday turned out to be the best day of the con!
Stay tuned for my final wrap up tomorrow!