Back when I was about 12, I had a wonderful meeting with Ed Lauter. He was looking for Bernie Williams at the Yankees' hotel in Anaheim and asked me, another girl about my age and her mother if we'd seen him; we were waiting in the lobby for the Yankees to come back from the game. The mother didn't believe that this guy really knew Bernie and refused to give him any real info. He walked away rather pissed.
A young boy who was also getting autographs and I ran over to the man about five minutes later to see if he'd sign a ball for us, we knew he was an actor but being young, weren't quite sure from where. He asked if we knew who he was. We were both shy and kind of smiled.
After he signed the boy's baseball, the boy ran away and I was left with Mr. Lauter and his teenaged son. He asked me if that had been my mom, I said no, it was my friend's mom and he told me to tell her she was an idiot! Haha! I agreed that she had been very rude.
He then went on to explain to me what he had been in recently: Not Another Teen movie, the original and remake of The Longest Yard, trying to figure out something I would've seen him in. He eventually wrote on the ball "To Elisa Hi...Ed Lauter "Seabiscuit"" saying that was probably the most age appropriate film. We chatted a bit more about the Yankees. He was very sweet and wished me well.
I did end up seeing him later in the series during batting practice from my perch behind the dugout. From then on, I always looked out for him in films and on television. And he was in them often.

This interaction has always stayed with me and I greatly appreciate him taking the time to chat with a young, inquiring girl.

I will remember him from ER, The X-Files and this particularly delightful interaction. 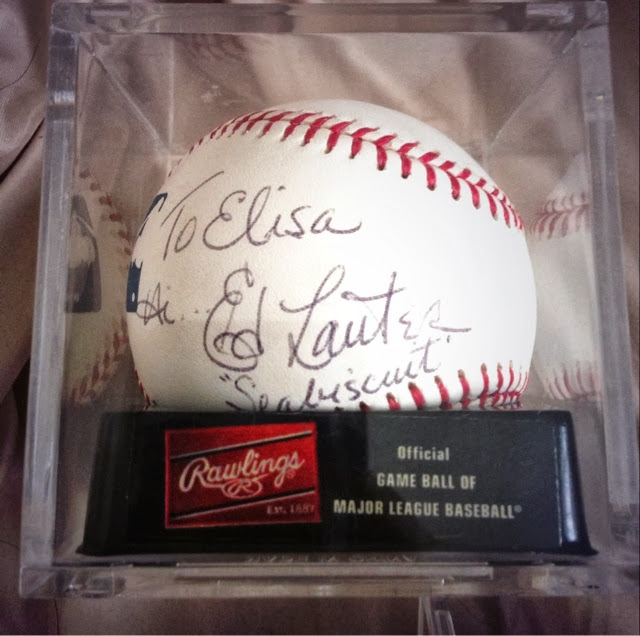