Last month, I mentioned how excited I was about the new STARZ show, "Da Vinci's Demons"! We'll they've released a new behind-the-scenes featurette for the show which premieres in just over a month! 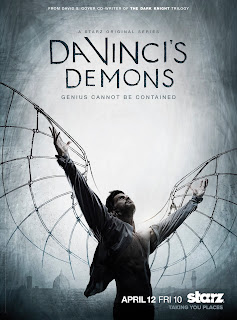 “He was one-third Indiana Jones, one-third Sherlock Holmes and one-third Tony Stark” – this is how David S. Goyer, creator and executive producer of the upcoming STARZ original series “Da Vinci’s Demons,” describes one of the most infamous historical figures of all time, Leonardo da Vinci.

In the all new featurette below, Goyer and the cast discuss the series premiering on Friday, April 12th at 10pm ET/PT, exclusively on Starz.  “Da Vinci’s Demons” is a reimagining of Leonardo Da Vinci as a 25 year old artist and inventor, from the mind of David S. Goyer, co-writer of the blockbuster and critically-acclaimed Dark Knight Trilogy, writer of the highly anticipated Man of Steel and story editor for “Call of Duty: Black Ops,” and “Black Ops II,” the most successful video game franchise of all time.

Tom Riley (“Monroe,” I Want Candy), brings Leonard da Vinci to life in “Da Vinci's Demons,” a historical fantasy following the ‘untold’ story of the world's greatest genius during his turbulent youth in Renaissance Florence. Brilliant and passionate, the twenty-five year old Leonardo da Vinci is an artist, inventor, swordsman, lover, dreamer and idealist. As a free thinker, with intellect and talents that are almost superhuman, he struggles to live within the confines of his own reality and time. He begins to not only see the future, but invent it.