One of the main reasons I am thrilled for this show is the wonderful cast.  I became a fan of the lead, Tom Riley (Leonardo Da Vinci) when he played Mr. Wickham on ITV's Lost in Austen miniseries. And when he came to New York to be on Broadway in a revival of Tom Stoppard's Arcadia, I went many [MANY] times to see the show and he was definitely one of the highlights of the show. Incredible actor!  He is also a delightful presence on twitter (@thisisTomRiley)! 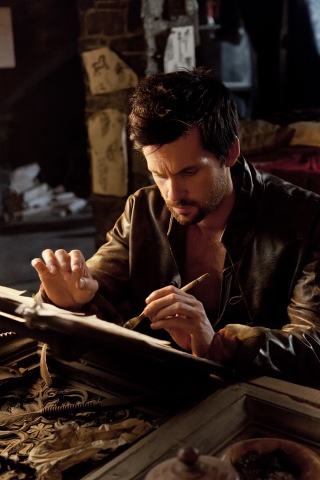 Joining Mr. Riley is his Lost in Austen co-star, Elliot Cowan (Lorenzo Medici); he played Mr. Darcy! Now, I've said this before, and I'll never stop saying it, one of my biggest regrets is not seeing Mr. Cowan in 'A Streetcar Named Desire' at Donmar Warehouse in 2009. I remain a big fan of his and try to see as much of his work as possible, he's an incredibly gifted actor who has not gotten the recognition in the states he should have! Follow him on twitter (@LostWaxProcess) too!

Laura Pulver (Clarice Orsini) who has been in two series I love, Sherlock and True Blood, is also in the DaVinci's Demons cast! She is also has a fantastic theatre pedigree!


The remainder of the cast, I'm not as familiar with their work but I look forward to being more exposed when the show premieres!

The premise of the show is a great one. I'm a sucker for period series and this definitely fits the bill:


In a world where thought and faith are controlled, one man fights to set knowledge free.

The secret history of Leonardo da Vinci's tantalizing life reveals a portrait of a young man tortured by a gift of superhuman genius. He is a heretic and skeptic intent on exposing the lies of religion. An insurgent seeking to subvert an elitist society. A bastard son who yearns for legitimacy with his father.

He finds himself in the midst of a storm that has been brewing for centuries. A conflict between truth and lies, religion and science, past and future. His aspirations to improve his position in life bring him into contact with the two opposing forces of the time—the Vatican and the Medici family who both try and lure him onto their side.

Leonardo must take up the fight against foes who use history to suppress the truth. A hero armed only with his genius, da Vinci stands alone against the darkness within, and the darkness without.

Facing an uncertain future, his quest for knowledge nearly becomes his undoing as he explores the fringes of his own sanity. Da Vinci uses his unparalleled genius as a weapon against his enemies and emerges as an unstoppable force that lifts an entire era out of darkness and propels it into light.

His story becomes a mirror into our own world, calling us all to join his fight to Free the Future.

The series is written by the great David S. Goyer who co-wrote The Dark Knight Rises Trilogy and the upcoming, Man of Steel! Just another reason to be intrigued!

Da Vinci's Demons premieres Friday, April 12th on STARZ at 10PM, moving to 9 p.m. the following week after the series finale of Spartacus. Don't miss it and stay tuned for more coverage!!!