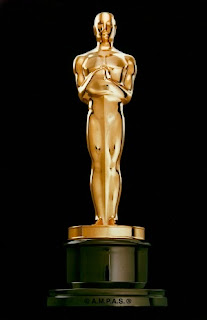 With the announcement that not only will most of the cast of Les Miserables will perform at the 85th Annual Academy Award ceremony, but also Adele will perform her nominated song, SKYFALL, I could hardly contain my excitement!  I've said it before and I'll say it again, this has the makings of being on of my favourite Oscar telecasts since I began watching. (Sure, thats not that long considering it's the 85th year of the awards but hey, I can't help it.)


First on my list is an incredible medley of Academy Award winning scores conducted by one of the masters himself, John Williams. The arrangement flows perfectly and includes almost all of what I consider to be the best film scores up until that year, 2002.

The second on my list is from before my time but nonetheless an incredible medley. Steve Lawrence and Sammy Davis Jr. perform at the 51st Annual Academy Awards held in 1979. The medley features songs never nominated for an Oscar.


The final favourite is from just four years ago. Hugh Jackman (current Lead Actor Nominee for Les Mis) hosted the ceremony. It was the year of the hit film, Mamma Mia!, the year dubbed as the official return of the musical! I especially love this because Jackman is joined but such a wonderful group of performers, BEYONCE whose voice is just to die for and future Les Miserables costar, Amanda Seyfried (who also starred in Mamma Mia! that year). This was directed by Baz Luhrmann whose ability to arrange all types of music continues to astound me.

So, those are my absoulte favourites. Did I forget any?

I thought I'd add a few more that are just as wonderful. Check them out below and don't forget to watch the 85th Annual Academy Awards Ceremony hosted by Seth McFarlane on Sunday, February 24th live from the Dolby Theatre on ABC. Coverage begins at 4PM (PST)/7PM (EST) with Red Carpet Coverage.

I can't NOT include this cute intro by Hugh Jackman at the 81st Annual Awards. His Les Mis costar, Anne Hathaway joins him.

I'm finding many of the videos I want to post aren't available... So what am I missing? What are your favourites?